I Don’t Know How I Know This

Inside the uplift of death—that moment–

When the white doors open

You will fly out of yourself long enough

To fly back into yourself in one terrible

To the sunlight, irises curl in on themselves

And alliums drop their radiating, purple petals to the ground.

Of exquisite beauty into a spring wind that rouses

The mind to start moving on those plans laid out in winter,

And you cannot help but stare, and weep with such joy the moment

Uplifts and white doors open, and you fly into yourself

Long enough to fly back out yourself in one orgasmic,

And when the sidewalks become dusted

White doors open and you fly out of yourself long enough

To never return to the state of unnoticing.

Every moment we build up and break down,

We dissolve, we sag closer to the earth,

Our muscles loosen, our jaws slacken,

And we become like fragile, spring birds long enough

To breathe into ourselves, long enough

To exhale one last time into the air—

And get swept up into the uplift where all the trumpeting

Daffodils wait, where all the irises unfurl

Their sex to the sky, where all the alliums burst

There you will stay long enough

To bloom the fragrance

Of a life well lived into the ever spring 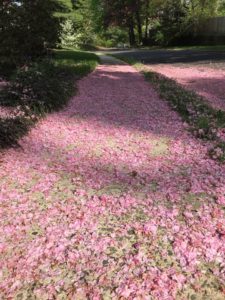 Some Thoughts on The Gender Binary

What I am about to share is going to piss somebody off.  Seems that way about most everything I say nowadays.  However, if you truly have faith in your God, or you truly have faith in who you are as human being, then what you are about to read should not be threatening to anything you believe or experience.  This is not to say that what I have written here is perfect.  Far from it.  Language barriers, prejudices, and fears—yours and my own– make that impossible.  Let’s get on with it.  I am ready for the mean, hateful, harmful, and trolling comments from “both” sides (and “both” is in quotations because well, you’ll see). I am also ready for nice comments.  I am inviting them too. I hope.

I will give you that the idea of the binary exists.  I know, many scientists today say the gender binary doesn’t exist in the ways we’ve traditionally thought, and I totally support their findings.  That said, the idea of polarities exists. It is seemingly everywhere—day and night, cold and hot, light and dark, rainy days and clear days, fire and water, sky and earth.  Having given you that, you will inevitably need to give me, that there isn’t, and never will be, a truly individuated or separate representation or living form that will ever exist on the opposite ends of the binary.  For the opposite ends of the binary are only ideas, even if they are created by God. If this scares you, then so must the idea of the morning, or of the evening, or rainbows, or singing.

The opposite ends of the binary only exist to overtake the other—swallow it up, merge within in it, into and unto, itself—not in battle, never forced—but in dance and song, and flavor.  That is the miracle, that is the beginning of all things.  The purpose of the binary is not to separate, but to join, merge, and hence, create.

No one can imagine the idea of the opposites without seeing, feeling, experiencing, knowing, or witnessing that they are all in some relationship with the other.

Go ahead, stand on the earth without forever being also in the sky.  Be in the middle of a perfectly sunny day and not know that evening is already on its way.  Step into a pool that you want not too hot and not to cold.  You get what I’m saying.

Having given you that the binary exists as theoretical reference points (I know, I know, the Bible says God created male and female and it also says: “Happy shall he be, that taketh and dasheth thy little ones against the stones,” or, “God brought them out of Egypt; he hath as it were the strength of an unicorn.”   I know, I know, you can take a verse of the Bible and use it to back up even the most outlandish ideas.  Like this one: “Slaves, obey your earthly masters with deep respect and fear. Serve them sincerely as you would serve Christ.”  I know you can take the fact that God killed about 25 million people in the Bible to represent the killing of our unbelief or to justify the slaughter of unbelievers, but then again, so do some Muslims).  It is high time and low time, to grasp and let go, once and for all, and forever anew, the idea that the front of a coin can be separated from the back.  They exist because of one another and because of what they manifest—and in the case of human existence—they manifest all that is wonderful (not the coins themselves, but what they represent, well, not what they represent, but what they demonstrate).

Cold is nothing unless heat exists.  Up means nothing without down.  Music is only heard in silence. Purple only arises between shades of blue and shades of red. Death prowls and life blooms.  It is the space between them that brings forth all things; where all things wondrous, flavorful, truthful (yes, truthful), and just plain living—exist.  It is in the mingling where the fun begins.

Two people do not have sex in order to annihilate the other.  They have sex to blend together, breathe and gasp together, come together.  It is this joining of bodies, souls, hearts, and minds that brings forth life.

I know, I just got done saying the opposite ends of the binary only exist to overtake the other.  Remember what I also said—the true opposite ends of the binary do not exist except in theory.  You will never find them in life—no man is ever just a man—he has his “feminine” side.  No woman is ever just a woman.  She will have her “masculine” side.  God becomes the mother hen to keep us safe under his wings.  No night is ever not slipping into day.

And that is my point.  Living is in the union.  Fun is in the merging.  Wonder is in the rainbow.  Beauty is in the evening sky.

I know, there are flaws in what I say.  Language makes things messy and muddles meaning up. You can easily take my words and use them to prove the exact opposite of what I am saying.  That being what it is—you cannot lose sight (well, you can out of your own shadowy, shame-based fears—and we all have them) that all the good stuff lives within and on and with and along a spectrum.  And nothing in between threatens the existence of the binary. The binary will always be the idealized ideas of opposites in the same way day and night will be always be idealized ideas of opposites.  I do not use the word “idealized” to mean better.  I mean it to say, the ultimate opposite ends of the spectrum only exist as ideas.  They never truly manifest, one without the other.

Go ahead, flip a coin.  Not only does it rise, tumbling upwards into the air, it also tumbles down landing on either heads or tails—and these will never exist one without the other—front and back. But I said that already, and I will say it again, at risk of being repetitive (the crusty idea of the idealized binary has been repeated for eons, but so has the idea that God creates souls to burn them in hell, or that the earth is flat, or that slavery is ever a human thing to do). So, I repeat:

It is the stuff that exists along the spectrum that is most intensely alive.  It is the dance between stillness and movement, music and silence, light and darkness, male and female, death and life that makes existence wonderful.  We are born, we die, and it is the living in between that gives either of these meaning (and please don’t think I am associating masculinity with light and darkness with femininity. Remember, however, that language is goofy.  Then again, feel free to associate anything with anything—you’ll get a good idea of how you live your life).

The spectrum is undeniable, and completely, and utterly, wondrously, beautiful, vibrant, and living.

So please do not tell me I do not exist as a transgender person.  I am a living arc–a living rainbow “across” genders. Please do not tell my queer friends, non-binary friends, asexual friends, and so on—that they do not exist.  We are the beauty and meaning of the ideas of so-called, male and female.  We are what is meant to be celebrated because the true opposites will never exist in form.  Murder is not always bad or the Christian religion would mean nothing.  Rebellion is not always bad or else freedom would not exist.  This is not relativism. This is reality.  No one loves without a hint of hate.   No one prays without a hint of doubt.

Do not fear the rainbow.  Go find it, and take out your phones and snap pictures of it.  Give thanks to Goddess for it. Take a selfie with it in the background.  It is a sign that God will never again destroy the earth with a flood—a flood of ignorance, fear, bigotry, or hatred.  The rainbow is the spectrum that blooms from the skies of our souls.

On Wanting to Give Birth
By
Jennifer Angelina Petro

Your rippling cloak of ocean and sky
Flows from your arms and shoulders,
Your mantle of universe-blue
Barely contains your night colored hair,
Your tunic of woven white presses against
The roundness of your breasts, nipples clearly defined—
This is how I saw you when I was supposed to be staring at Jesus.
Oh, to be chosen, wanted, ravished by holy desire–filled with god’s seed–
To be able to lay my hands on the globe
Of my belly months later, and feel my child move–
To surrender to opening the mouth of my sex
And spilling my baby like dozens of roses and waves of song
Into the open air–to feel the utter relief and fulfillment
Of her being placed at my breast where the milk begins dripping with joy–
To have my baby suckle– to have my baby swaddled to me–
To know she came from me and through me–
To know I carried her—another human being—
In my womb—
Mary, Mother of All, tell me why
I will never know this blessing? Tell me why I know
I am your gender and yet will never bear a child?
Tell me why I will never nurse? Why I will never be earth
For the seed of a man to take root?
I know, sweet Mother, I am giving birth
To my true self–a little girl of radiant beauty–
I know–and I am beyond glad–I am in ecstasy–
And yet you know this, you understand–
I want to bear a child–I want to grow an ocean within me,
I want to feel my insides rearrange, making room for another,
I want my blood to bring sustenance to another,
I want to give birth and to nurse and to stare down
As life flows through me into the mouth of another–
And I never will. Please—
Mother of All–wrap me in your mantle scented with sky
And rock me in your arms of mercy until this aching
Dissolves, until this longing eases, until this grieving
Turns into yet another surrender of gratitude in being who I am
Right here, right now—and then kiss me–tell me again
How we are sisters of grace.