I had an uncle who fought in WW II, and he was never the same mentally. He was an extremely talented writer, and his PTSD from the war destroyed the rest of his life. It’s people like him I honor–and all the military people of color throughout history, and the indigenous people, who fought for rights they still don’t experience, who fought with little to no recognition, who fought and were betrayed by the very country they were fighting for.

I think especially today about my transsiblings who have lost their careers in the military–their years and decades of service–all because of trump and his religious extremist terrorist regime.

I have met homeless vets on the streets of Philly, in soup kitchens, when I’ve visited homeless shelters to sing–these people are in shock–not only because of the things they’ve witnessed, done, felt–but because of the way their country let them down once they returned.

These people and the trans service members are not just expendable pieces–nor were the people of color who served in the military….We all know that—but let’s not kid ourselves that this country really cares about the actual human beings fighting these horrific and most often unjust wars—If they cared they wouldn’t be so actively fighting to take away the rights of people like me—slapping the sacrifices soldiers have made to protect my rights and the civil rights of all people–in the face….only to watch their country erode into a cesspool of hate, bigotry, and a way of thinking that is so backwards mentally, spiritually, socially, that it’s difficult to see a way out.

You know I’m a pacifist at heart/soul, but a revolution might be what’s needed to change the shit going on in this country–and for those future veterans—the marginalized ones who will fight, who do fight everyday—-it will just be a continuation of daily battles.

And yeah, it pisses people off to hear comparisons of transpeople with military members–as far as us being “heroes.” –but the truth is, transpeople like me fight a war to exist every day–and that doesn’t make us heroic, it makes us victims in a battle we did not choose. We shouldn’t need to be called heroes just because we’re trying to live our lives in safety. I don’t believe the ghosts of the soldiers who fought for American freedom would be happy to know genocide is happening right on our very soil—-again–it’s never actually stopped.

Going out anywhere–to church, the store, to the post office, to any public restroom–is putting myself at risk. I am constantly hyper vigilant of my surroundings and those around me—why? Because my life IS a war zone. If people weren’t so scared of people like my why would trump and his weaklings want us gone so badly? So sometimes the comparisons are worthy to make between veterans and queer people like me.

And it’s not only queer people–people of color are at war in this country–young black men just picking up trash are veterans of living a life of war everyday—putting themselves in danger just because they wear a hoodie, Islamic people just trying to worship, to make a living–they are at war in this country–Jewish people, Latinx people….people in jail whose lives are completely destroyed for selling/using weed….Marginalized people–each and everyone of us is a veteran of wars we fight everyday because we are the hunted.

I am not saying I want to draw attention away from military vets–Far from it. I want us all to rise up and actually fight for what they fought for—a country free to all and for the rights of all. And as long as white-supremacist colonization and brutality is still going on there will never be peace. We will always be fighting. 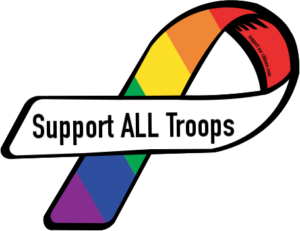