Tomorrow is International Transgender Day of Remembrance. A day to honor the trans/non-binary people murdered thus far this year–that we know of. I say, that we know of, because there are very likely others not known due to misgendering by police/family. There are some organizations that put the number higher than that.
This year, there were 34 known murders in the US. The highest total in almost 10 years. Most of these were trans-women of color. Internationally, there have been over 350 trans/non-binary people murdered. This too is the largest number in several years. The oldest being 31, and the youngest, 15. 22% were killed in their own homes. Almost 50% of those killed happened in Central South America, and, in particular Brazil.
This number doesn’t include the unknown number of trans/non-binary people who died of suicide. It’s likely many of them died as a result of bullying, fear of the future, and lack of acceptance in their families, friends, and the world in general.
What are some things we can do to end this epidemic of violence? Support transgender and non-binary people. Fight for their rights–to housing, medical care. Talk about accepting people like me in your families, places of worship, schools, circles of friends, and in local and national politics. Invite transgender people into your homes for housing, meals, and kindness. Protect the rights of sex workers.
Donate money to the Translifeline, the Trevor Project, the HRC, the The National Center for Transgender Equality, the Okra Project, The Emergency Release Fund, The Black Visions Colletive, The Transgender Law Center, The Marsha P. Johnson Institute, For the Gworls, Trans Women of Color Collective, SNaP Co., INCITE, Black Trans Travel Fund, G.L.I.T.S, among many others.
In this moment, I am not sure what else to say except, Join me Friday, November 20th, at 7 PM, at SAGA’s Online Memorial Service, (the Meeting Code is: 655-983-3799, the Password is: 350350), and you can honor them learn the names of the 34. You will see their pictures. You will see they were just people. People with lives ahead of them. Lives cut short due to transphobia.
We must all say their names.
We must all morn and be outraged.
We must all act to end the violence and murders.
This is one of the 34:
Queasha D Hardy, 22, black transgender woman, shot to death in broad daylight, in Baton Rouge, Louisiana, July 27. 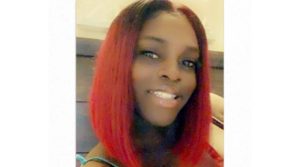