My First Father’s Day Being a Mom 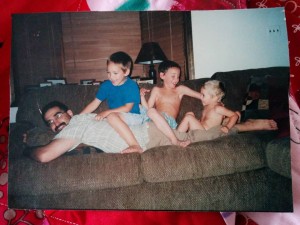 When I asked them how they felt about it being Father’s Day, they said they were OK.  One asked if he still needed to get me something.  Another said he worked double time on Mother’s Day making cards for two moms and now he appreciates the day off.

I have the best kids ever.

When I think of the times I held them as infants on my chest and sang to them, when I think of pulling them in wagons and pushing them in strollers—all the times carrying them in front packs, the fishing trips, the chasing after ice cream trucks, the making bread and chimichangas, all the times we drew together, all the stories I told at bedtime, all the snake hunts and ootheca searches (praying mantis nests), all the movies (watching Pirates of the Caribbean and the Harry Potter movies over and over and over), all the times playing catch or pitching to them, or the time I took them out of school (along with my students) to take them to see the Parade downtown when the Phillies won the World Series in 08; the teaching them to drive, the times sitting in Barnes and Noble drinking soda and looking at books, the teaching the few guitar chords I know, the screaming at the top of my lungs at Battle of the Bands, the being so proud when they won first place–It wasn’t a lie.  All that daddying.  All that fathering.  It was real.  Always will be.  Nothing will ever change my having been their father.  No matter what anyone says, nothing can ever take those memories away.

My kids can see him in the old photographs with his scruffy goatee, scruffy clothes, silly grin.  They can see hear him in my voice and see him in my hands and face.

But I am Mom Number Two.  Always was.  It’s just none of us knew it until now.

My boys are my treasures.

I love them with all of my heart.

Nothing will ever change that I love them to the moon and back.  And always will. 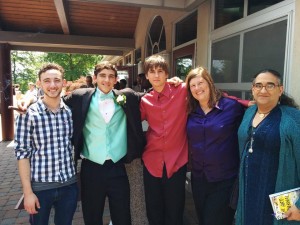 A family photo at Ben’s graduation this June, 2016.  He’s the middle one, with Sam to his right, and Daniel to his left–and then Mandy, Mom Number One, and then me, Jennifer, Mom Number Two.

When you stop
And think about it,
The idea is absurd:

Beetles that light up.
Bioluminescence
They call it.

I call it utterly and phantasmagorically
Miraculous.

Along the river banks
Of the jungles of Malaysia,
Fireflies synchronize
Their flashing lights;
In the town of Donsol
In the Philippines,
Fireflies stay around
All year, coexisting
With the locals, like
Eccentric sentinels;
In the Great Smoky Mountains
Of Tennessee,
Fireflies have been seen blinking in unison.

If you are a believer
In doubt and darkness,
If you partake of the white bread
Of theorized negativity,
If you harbor any spiritual misgivings
Then stop and think about this
Outlandish phenomenon
Occurring in backyards and fields
Around the world, better yet
Stop and see it for yourself.
And once you do, ask yourself:

I am not suggesting ignoring the wrongs, or doing nothing about them.

All I am saying is fireflies exist, and that you are allowed to be happy.

Why not allow these little,
Avant-garde angels lift you,
Illuminate you, and save you
From the cold, dry emptiness
Of only seeing the dark.

Try for your own sake
And for the sake of the future:

Stand on the edge
Of a cornfield at night
In deep July, or find a field, backyard, or woods
Humming with mystery, and simply be
A witness to the dazzling carnival
Happening in the tree tops,
Skimming the dark grass, bobbing
Up and down in the cool, moist air, like
Strings of moving green Christmas lights.
See these little beetles with their lovely
Blinking bellies, and allow yourself
To blossom, like
A night gladiolus, sending the fragrance
Of your newly found faith
Into the world.

Around you,
And within you, 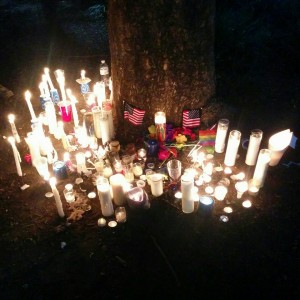 vigil (n.)  1200, “eve of a religious festival” (an occasion for devotional watching or observance), from Anglo-French and Old French vigile”watch, guard; eve of a holy day” (12c.), from Latin vigilia”a watch, watchfulness,” from vigil “watchful, awake, on the watch, alert,” from PIE root *weg- (2) “be lively or active, be strong” (source also of Old English wacan “to wake up, arise,” wacian “to be awake;” Old High German wahta “watch, vigil;” see wake (v.)). Meaning “watch kept on a festival eve” in English is from late 14c.; general sense of “occasion of keeping awake for some purpose” is recorded from 1711.

—From the Online Etymology Dictionary.

We were watchful, alert to every loud sound,

We were lively, active, and strong—we were awake

So fully our guard dropped and we wept in the arms of strangers;

We were watchful, full of rage, full of questions,

We were a living sea of sorrow that crashed the shores

And we were alert to every loud sound,

And we rose on embraces from strangers—

We were awake—watchful, alert to every sound—

We shouted out to high heaven the names of the stolen,

We whispered to hell the name of the thief,

We held signs and wrote in chalk on pavement

Messages of solidarity, we assembled forests of candles,

Altars of light and tears, altars of hopelessness turned

Into hope somehow, someway, some holy

And desperate way.  And we were watchful, and we were awake,

And we were alert to every loud sound, and we were lively,

And we were strong, we were active, and we sang knowing

And heartbreak, families just finding out their loved ones

Were gay and gone—

This was the homily of tears,

This was the vigil of no tomorrow,

This was the night of never ending darkness lit up

By hearts and candles,

This was the right and human thing to do,

This was the pulse of a nation,

This was the vigil for us all.

Grateful as I am for the moment
Of silence, for the pausing
To stand together, breathe
Together, do nothing with our phones together,
Remember people
We did not know together,
Let us rise up together
And share a moment
Of weeping, a moment
Of rage, a moment of falling
Into each other’s arms,
A moment of shouting,
A moment of wailing and tearing
Our shirts, a moment
Of witnessing each other’s pain
Together, a moment of-
We-must-stop-this-from-ever-
Happening-again-together,
A moment of complicity,
A moment of shame as a nation,
A moment of guilt at doing nothing except
Stay silent, a moment of knowing
We must change, put an end
To any hatred within ourselves alone
In our moment of silence, alone
In our moment of grieving, alone,
In our moment of righteous indignation–
We must change–together alone, for one
Everlasting moment, for one eternity
Of silence, for one generation of silence,
Lifetime of silence, gone forever silence.
Let us be silent no more.
Let our voices be heard, our tears
Be seen, our changed minds
Be demonstrated by actions changed
And full of common sense, any
Sense, any enlightened, civilized
Semblance of sense, let us be silent
No more, let us be still no more,
Let us be revolutionary together alone now—
For the moment has passed, is
Passing—the moment is
No more. 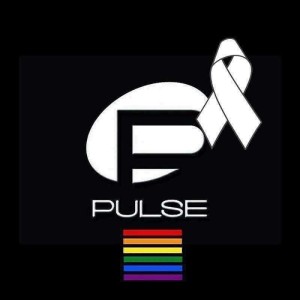 Pulses lost in the Pulse.
Pulses slowing, pulses struggling to flow
On floors, in hospital beds,
Behind tables, and rooms
Of young people existing
In secret and fear.
Pulses aching with grief and rage.
Pulses on fire with loss.
Pulses full of no more, no more, no more.
Pulses must become one pulse.
Your pulse. My pulse.
My transgender pulse.
Pulses of privilege and safety.
Pulses of people praying
In churches and mosques,
Synagogues, temples,
And living rooms.
Pulses of people in alleyways.
Pulses of people behind closed, political doors.
Pulses of your sisters.
Pulses of your brothers.
Pulses of those who do not identify
As brother or sister.
The pulse of deep humanity. Pulse
Within pulse, pulse within pulse.
Pulse of Pride.
Find inside ourselves,
Find inside each other,
Pulses to rise, pulses to fight,
Pulses to beat as one
To change the world,
To hold one another
In reverence and mourning,
To eradicate hate-mongering,
Barbarian pulses of those with ideas
Wrapped in blood, hypocrisy,
Shadow, pure insanity. Pulse
Within pulse. Find the one pulse
Of those who seek to live
In one rhythm stemming from one heart.
In the soul pulse of a nation
On the brink of revolution,
A revolution to breathe together
As we were meant to do.