A Call to White Men With Healthy Masculinity Everywhere

to Help Save Our Nation from White-toxic Masculinity,

This is not a post about hatred of men. The vast majority, I believe, of men, do not believe or act in these evil ways. That’s why I distinguish between healthy masculinity and the toxic, cowardly, and yes–evil masculinity.

It’s the task, the charge, of all men with a healthy masculinity, a feminism of heart and mind, to actively, and openly work against the toxic masculinity that commits acts of terrible, and horrifying terrorism. In your everyday lives call out sexual harassment, misogyny, call out Islamophobia, anti-Semitism, racism, the encouragement to build walls and cage immigrants, homophobia, transphobia. In a very real sense, you have tremendous white male privilege. It is largely in your hands to help effect brave and meaningful changes.

It is a traditional stereotype of men being protectors and defenders. I ask you to embrace those roles and help protect your non-white-marginalized brothers, sisters, and siblings. Speak out. Write to your newspapers promoting healthy masculinity, speak up in your groups, families–teach your sons to be defenders of the oppressed. Teach healthy masculinity. Teach your children how to use their white privilege to help the marginalized and those targeted with hate and violence; educate yourselves in ways you can be effective, brave, and powerful agents of positive changes, and then pass that learning on to other men.  Speak up in your places of worship, jobs, schools, and family gatherings about healthy masculinity.  And finally, it’s crucial to speak out for gun control.  Another fact that cannot be denied is that the weapon used in the majority of gun-massacres is the A-15 assault rifles.  These military weapons need to be removed from American society.  So, yes, in addition to teaching about healthy masculinity, speak up for the banning of assault weapons.

And perhaps most of all—keep working on your own internalized homophobia, racism, anti-Semitism, transphobia, Islamophobia, and misogyny.  This is work for all of us to continue doing.  However, the more men work on their shadows, their own inner insecurities, fears, ignorance, and self-hatred, the more the horrific projections toxic males throw onto people they hate.  Support one another in these ongoing efforts.  Listen to the marginalized and oppressed.  Understand their basic humanity and the struggles they are experiencing.  Be examples of powerful, meaningful, and enlightened change in your communities.

With all my heart–so much depends on you. It’s just the truth. The facts cannot be denied. The people who commit acts of evil violence are white, men steeped in toxic masculinity. Help change and help save our nation. 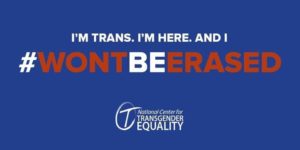 A Call to Action For Allies of Transgender People

Violence against transgender people and other queer people, especially queer people of color, is up ever since the terroristic Trump regime took office, and will only increase if the latest political assault on trans people goes through.

Trump wants to legally define gender based solely on body parts.  This would effectively erase transgender, intersex, and other nonbinary people out of existence.

Of course, we’ll still be here—we’ve always been here, and always will be.

What will happen though is that any and all legal protections will be removed (not that we’ve had many of them to begin with).  It will be “legal,” to deny transgender people healthcare, insurance, employment rights, and housing rights.

This amounts to genocide.  Yes, it’s a strong word.  Genocide means: “the deliberate killing of a large group of people.”  Its synonyms include: “mass murder, mass homicide.”

Will there actually be a mass killing of transgender people? I hope not, of course.  However, if one factors in an increase in the undocumented and documented murders of trans people, the documented and undocumented lives of young trans people lost to suicide as a result of constant—federally condoned violence and bullying, if one factors in the transgender people who will die as a result of lack of health care, or who will die on the streets due to homelessness, then the numbers of dead transgender people could become staggering (and yes—one is too many).  These atrocities will all worsen if the federal government decrees that we don’t exist.

What frightens me the most are the terrible consequences that young trans people will suffer. The kids.  The ones growing up into a future where they will have no federal government protections.  Their futures are in jeopardy even more than they are now.

It’s time to rise up and stand with transgender people and all other LGBTQIA people.

You might be thinking: There are a lot of other kinds of people to stand up for—lots of causes to fight for, and you’re right. Consider this though:

The next step after erasing trans people will be to erase people based on their sexual orientation, religion, race, political party, health issue, people on birth control, people who’ve had abortions, people who are differently abled, people who are different than the white and the rich, the educated and male.  What will it do to the #MeToo Movement?  A movement already scoffed at by many. Should sexual assault victims have human rights? Should children?

There was a time I would have thought these things would never, ever be possible.

They are though.  They are.  It has already begun.

Stand with me.  Stand with us.  This affects everyone.

What does it look like to stand with trans people?

-Write to your senators and local politicians.

-Educate your family and friends about us—risk being hated for what you believe.

-Add pro-trans FB profile frames on your profile pictures and/or your FB banners.

-Spread the word across all social media that trans rights are human rights.

-Stand for us in your places of worship and schools.

-Give to TransLifeLine, the Trevor Project, GLSEN, and other LGTBQIA services, like the ones offered at Love in Action UCC.   and The Center for Transgender Equality, The Human Rights Campaign.

-Go to the homeless and bring them food, water, blankets, medicine.

-Go to public restrooms with us.

And yeah, I get it.  Some of you are afraid of what others will say.  Some of you might be afraid for your safety if you openly fight for trans rights.  You might fear for your jobs, for your membership in places of worship, for what your friends and relatives might say. I get it.  On a daily basis, believe me, I get it.

Anyone who voted for Trump is complicit in the violence and deaths that will increase as a result of transgender people being erased in the eyes of the federal government.  So are those who remain silent in the face of such abuse of power. If you are too afraid to stand up to any of your friends and relatives who support Trump for my sake and/or the sake of an entire group of people, then where does that put you in relationship with those friends and relatives?  Where does it put you in relationship with me? With yourself?  With your faith?

No.  This isn’t about guilt–at least not about unhealthy guilt–like the shame that erases oneself.  A certain kind of guilt can be healthy.  If you feel guilty about something you did or didn’t do and knew you shouldn’t have done that thing or should have done that thing–then feeling guilty can be healthy.  Shows you have a conscience.  So, no.  I am not trying to shame you–just help motivate you to rise up and show your support in public ways.

This is a plea.

This is a begging for something that should never have to be begged for.

Tired of the fear I feel on a daily basis.  Will the place I’m going to be safe?  Will I be assaulted?  Will I be safe in a public restroom?  Will I live to see my grandchildren or be cut down because of who I am, and not what I choose to be?

I’m tired.  And I will keep fighting.

No.  This isn’t about guilt if you can’t fight, or need a break from fighting.

It’s a charge.  Fight if you can.  Not just on social media, but with your lives.

Stand with us openly, actively.

Lives are at stake.

Freedom is at stake.

The fate of the future for countless young people is at stake. 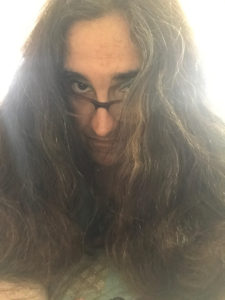 The willow sweeps the grass of leaves,

The autumn sends her more,

And so, she sways and tends the day,

Her life an open door.

The momma bear prepares her den,

Ambling through the deep,

Wide she yawns, until spring’s dawn

And hunkers down to sleep.

Her sleep will be the sleep of birth,

Her dreams of cubs so small,

And in that space, aglow with grace,

She sleeps and nurses all.

The willow shelters all who come,

Her garlands a cathedral make,

And with the wind she softly sings,

And gives instead of takes.