Playing in the River of the Reality of Binary-Relativism

Try and take hold of the night.  What ends up filling your hands is darkness tinged with light, whether that be moonlight or starlight, there will be traces of the coming morning or the retreating sunset.

Likewise, try and take hold of the day.  What ends up filling your hands is light tinged with darkness, whether it be the shimmering shadows of the willow, or your own shadow, or that small, rushing anxiousness that evening is approaching much faster than your plans would like.

Night and day are ideas—in the truest sense they do not exist as opposites—they are ever and always touching, held together by a river that flows both ways.  I know, the “held together,” and “flowing both ways,” seem to contradict the idea that night and day are one.  Words are limited in scope and range.  And it is easier (safer) to write in ideas like black and white and the binaries of male and female.  You can try and wrap words (ideas) around other ideas and, at best, you come up with a poem, and, at worst, fear-based violence.

Why is it safer (easier) to write in terms of binary ideas? Describing day and night as light and dark is strangely comforting to those people who fear stepping into the river.  Describing greys, tones, gradations, the multitude of colors that inform sunsets and sunrises–this type of thinking requires more effort, more consciousness, and an openness to the idea of the infinite creativity of the God they believe in.  It is easier (and safer) to let one’s thinking be governed by ideas that appear to fit their notions of “the opposites.”

It’s the same with thinking of the idea of the so-called gender-binary.  Defining gender by body parts, chromosomes, and reproductive functions is the same basal reasoning as saying day and night can be defined by clocks and the amount of light we see or don’t see.  Reducing genders to body parts invalidates the manifestations of the inner and outer gender identities that so many experience in the reality of their lives.

Life flows in a circular current between the ideas of binaries.  The reality is spectrum, shadows, fading in and out colors, touches, whispers, hints, nuances—nothing exclusive unto themselves—travel West far enough and you slip into the East.  Rise North as far as you can go.  You will only descend into the South, like a waterfall.

This blending and interwoveness isn’t to be feared—not within the notions of day or night, male and female, mania and depression, faith and disbelief.  Everything touches.  Everything mixes.  What is created along that circular movement is peace, life, the aforementioned wonder, and yes, the infinite ways these ideas manifest in the river of the world.

But what of science?  Doesn’t it prove the idea of opposites?  Some people use science in the same way they use bibles—selectively.  While deriding the idea of the gender spectrum they propagate the ideas that climate change doesn’t exist, that the earth was created in six days, that all the animals of the world fit into an ark, and for some, that the earth is flat.

Science is crucial to the future of humanity. So is letting go of fear of change and the perceived threats to the family.  Erasing the idea of gender binaries doesn’t unleash havoc on the family.  Instead it opens up the definitions and manifestations of family.  It doesn’t mean the end of procreation.  It doesn’t mean the end of heterosexual, cisgender marriages.  All it does is threaten the shadow-desires some people feel but are trained to be experienced as deviance and to be felt as shame and fear.

The idea that binaries are ideas sometimes threatens people in other ways—particularly that the world will dissolve into relativism.  What is so threatening about that–whether that relativism be cultural or societal?  If the idea that there are no absolute truths threatens one’s spiritual security then where is their faith?  In reality, one cannot escape cultural relativism.  It’s the same with the ideas of black and white and the gender binaries.  For example, take a look at the word, “relativism.”  It’s clearly “related” to “relating,” ‘relations,” and “relationship.”  And these, in turn, can be traced back to the word, “refer,” which, means, in Latin, “to relate, and to carry back.”  Let’s carry the idea that gender is based on body parts back to the reality that some “men,” are born with vulvas, and some “women,” are born with penises or combinations of both.  Those aren’t ideas—those are realities.  They are not mutations or abnormalities—they are as natural as being born with a certain hair color.  What is the threat if someone knows they are a gender that may not correspond to the body parts that some people associate with a particular gender?  In reality, there is no threat.  The threat is fake news.

In the same way, relativism does not erase decades of fighting for women’s rights and feminism.  However, if modern feminism and the fight for respect, dignity, safety, jobs, pay rates, does not include transwomen and other people on the spectrum that identify as female, then it isn’t truly feminism.  It is as guilty as the extremist Christians that hold the old idea that in order to be female you need a vulva as defined by the confines of reproductive function.

All things are related, in relationship, and we can even have “relations.” These are realities.  The idea of night being related to the idea of day and the reality of these relationships can be experienced in our everyday lives, and no one is threatened.

Knowing binaries are ideas does not blur or muddy the waters of reality’s river.  They liberate us into realizing the infinite facets of the divine radiating prisms of color that touch the world with joy and wonder—in other words—variety—infinite variety.

Heaven hell, good and evil.  These are ideas inherently couched in relativism—cultural and spiritual.  Killing is wrong unless you’re defending your flag or religion, or the world from abortion; stealing is wrong unless you are trying to save your children; war is wrong unless it is for oil or to get rid of “evil doers,” who believe something different than you.  My religion is right because yours is wrong, my book says so, your book is wrong.  It’s silliness—dangerous, childish, fear-based silliness—and most of it propagated by men insecure of their own sexual/gender identities and possibilities.  Everyone knows how dangerous, cunning, manipulative, and cruel a man can be when scared.  History is full of men scared of losing something or scared of something being revealed and to prevent this they resort to violence.  And it is undeniable that many men who rail against homosexuality are found to possess porn, and or engage in sex with other men.  Why is that?  Because gender is a spectrum and something to be ashamed of.

Ask yourself reading this right now if it inspires you with vehement hatred, anger, and, if you’re extreme—violence?  If it does, I suggest you have little-to-no faith in your god—your beliefs, which are nothing more than ideas woven with communal feelings—are weak.  Indeed, they are relative.  You’re proving it by being upset.  If you’re living in the prison of the idea of binaries and you’re reading this, and you have some twinge somewhere within you—whether that be between your legs, in your heart, or in your mind—that moves you to the suppressed knowledge that you are actually happily gender-non-conforming—that you are perhaps a gender other than what your genitals say.  Most certainly it points to your shadow hiding conscious or unconscious secrets.  What if you’re feeling a secret, joyous sense of freedom as you read this? I suggest that indicates you are a true believer—in the sense that you believe in a god of infinite possibilities and varieties that in no way threatens anyone or anything—only your limited ideas.

Go play in the river.  You can’t drown in a river made of joy—unless you become afraid and slip back into the suffocating ideas that kept you from going near the river in the first place.  Look, there are others already there—splashing, swimming, and forming bridges called Fun and Freedom and Faith.  There is room for all.  Go be baptized in the infinite variety of your god. 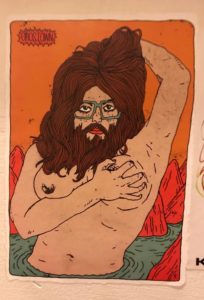