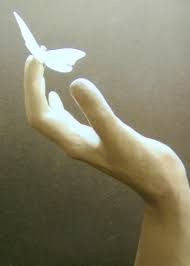 Once upon a time Made asked the Maker to teach it about letting go.

“I will need to Make you differently in order for you to learn that,” said the Maker.

“Alright,” said Made, “as long as I will be able remember the Way I Am Now.”

“You will,” said the Maker, “in fact, that remembrance will be the door to your success, but in order to remember and in order to learn about letting go, you will need to experience forgetting.”

And so the Maker recreated Made.  And Made was given hands, feet, and the senses.  Made became, in short—Human.  And in order to learn about letting go, humans were made to grasp.

And while the Maker was working, Made asked: “Tell me what you are doing.”

“I am making you Human.  Your fingers and the structure of your hand will be able to grab hold of things—to draw things to your body for use and inspection. Your feet will be able to grasp the ground and then push it away thus creating the ability to move—but the grasping comes first.  Your eyes will be nothing more than truncated limbs that will be able to take in what they see.  You will be able to feel when someone is looking at you, for eyes truly touch.  And you will be given other senses—smell, hearing, taste—and they will all seek to take-in, to gather, to bring in towards your body experiences that will help you begin to remember.  Even your mind will want to grasp things—ideas, perceptions, dreams.  And all of this grasping, grappling, grabbing, touching, and holding—will keep you stuck on Earth—until that is, you remember, and then learn to let go.”

“And how will I learn that?” asked the newly formed Human.

“You will grasp and hold onto things until those actions and attitudes hurt too much.  Then you will learn to let go.”

“You mean I will have to feel pain in order to learn how to let go?” asked the Human.

“Yes, there’s some tiny glitch in the system I’ve created.  Letting go hurts sometimes, but not as much as the holding onto things.”

“A glitch in the system?  I thought you created perfection.”

“I did.  The glitch is your misuse of freedom, and that’s not really a glitch so much as a lesson that needs to be learned.”

“Oh, I see,” said the Human, tears suddenly forming in her eyes.

“Good bye,” said the Maker weeping quietly, “I love you.”

And as the Human began descending the spiral staircase to Earth, she called up, “Hey! Love is holding onto things, right?”

The Maker laughed and said, “No, love is the ultimate letting go.”

And the Human, while walking down those silver, rainbow-dappled stairs, began to be filled with both wonder and fear, for she began forgetting where she had come from and where she was going.  Her memories dropped away like pine cones from a shaken tree.  And as her last memory fell away and she stepped into the waiting egg, she understood how much the Maker loved her.  The Maker loved her enough to let her go. 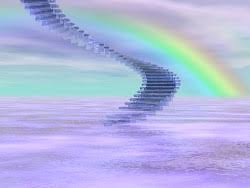