Planting Seeds for the LGBTQIA Community and its Allies

“What does it feel like to be transgender?” the eight-year-old asked wearing a t-shirt that read: “One of a kind.”

“THAT is a great question,” I said, “thank you for asking it.  For me, being transgender feels just normal.  It’s me.  It’s who I am. It’s awesome. When I realized who I really am it was the happiest moment of my life.  It feels wonderful, and sometimes scary, and sometimes I struggle with learning more and more about what makes me feel more comfortable being myself.”

She listened with wide-eyes…wide with wonder.

“What does it feel like to be you?” I asked, “Wonderful-one-of-a-kind-you.”

“It feels good,” she said, “People laugh at my jokes, my friends like me.  Do you want to hear a joke?”

“What is the best time of the day for a clock?”

“Six-thirty,” she laughed, “It’s hands down the best time of the day.”  And then she laughed again at her own joke.

Another child, probably around the same age as our budding comedienne, asked: “Are you a boy or a girl?”

“GREAT question,” I said, “Thank you for asking it.  I am a girl.  I am a woman.  When I was born the doctors and my parents all thought I was a boy.  I looked like what they thought a boy should look like.  But then, as I got older, it just didn’t feel like I was a boy, and then, little by little, I realized I’m actually a woman.”

“But you have a deep voice,” he said.

A few minutes later, I asked an adult, “Hi, are you familiar with LGBTQ things?”

They looked embarrassed and then confessed, “I don’t even know what those letters stand for.”

“Want to learn? I asked.

And so, I explained what they mean, and then curtsied and said, “And I am a transgender woman.”

“Ooooooh,” she said, her voice modulating up and down as she prolonged her, “Oh.”

Throughout the evening I asked the same question to kids and adults and got a variety of answers.  Several kids knew what the letters mean, while others didn’t.  Some kids and parents said they knew lesbian people, gay people, trans people, and all of those kids and parents said it with complete every-day-ness, which, of course, it is.

One ten-year-old asked: “Is it normal to be transgender?”

After thanking him for the question I said: “Yes, it is.  It’s normal to be gay, bi, lesbian, it’s normal to question—so, yes, it’s normal.  Is it not as common to be transgender?  Yes.  But it’s normal,” and I handed him a flag. 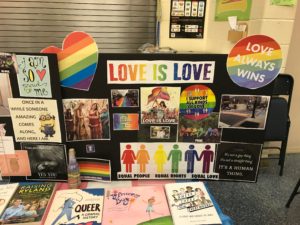 One little boy entered the fair, holding his mother’s hand, and pulling her eagerly over to our table.  He was probably seven.  His mom told us, “He saw your table and was so happy.  He says of himself, I’m not a boy, I’m not a girl—I’m me—Benjamin.”  He proudly took a rainbow flag and explored our displays with eager eyes and a happy, validated heart.

I could go on and on with wonderful moments like these.  Being at a diversity fair at a local public school–Glenside Elementary School, in Glenside, PA., was a complete joy.  It was an honor to be asked.  Glenside is a fairly conservative town, and the diversity fair has always featured tables with different countries, religions, foods, and so on.  Never in their history have they had an LGBTQ+ table.  We were a first.  And yes, it was a nervous first.  The organizers weren’t sure how we would be received.  They figured none of the parents would be mean, but they thought it was possible some families wouldn’t take kindly that we were there.  We worried parents would shepherd their children away from our table, but it turned out to be the complete opposite.  Parents and children flocked to our table.  It didn’t hurt that we were giving away cupcakes, Skittles, stickers, rainbow flags, parent and child resources, and so on.  And they came—dozens and dozens—probably well over a hundred people—maybe closer to two hundred.  And every family that came was happy we were there.  They asked respectful questions, had supportive things to say, and took advantage of our free resources.  It couldn’t have been a bigger success.  We planted many, many seeds that night—for both allies and queer kids, who may or may not know they’re queer yet, or do know they are, but keep it a secret, to other kids who proudly know they are.  We demonstrated that queer people are people—fun, smart, generous, kind people.  We celebrated the LGBTQ+ community, and its allies.

We made many wonderful connections. We met someone who helps get homeless LGBTQ+ kids of the streets.  We met another who helps place LGBTQ+ kids in foster care and get adopted.  We met teachers and educators needing ideas and support for queer children in their classes.  Networking is so key in helping the world work together to help queer kids.

We were invited by my friend Kate, who was organizing the event.  She was inspired after she saw an episode of Liz Plank’s, Divided States of Women, which featured my church (Love in Action UCC) and myself.

Our table was stellar.  We draped it with a large rainbow flag and a large trans flag. We had several poster-board-sized displays.  One of them had queer people throughout history—past and present.  We had a display for queer sports figures.  We had a display for queer entertainers.  We had one with queer comic book heroes (that board brought a lot of kids over to our table).  We had another devoted to transgender people.  Another devoted to simply loving yourself as you are—your bodies, your talents, your genders—a total celebration of loving ourselves.  We also had a board for general Pride—with pictures of queer people of all kinds.  As mentioned, we had a bunch of picture books about LGBTQ+ people and issues.  We had a lot of parent resources for loving and accepting and parenting LGBTQ+ children. 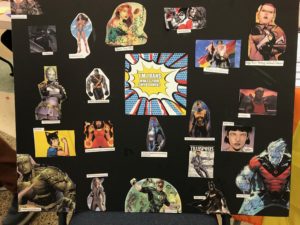 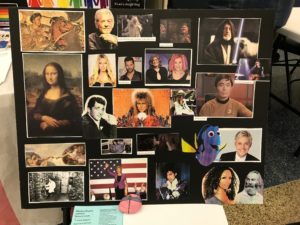 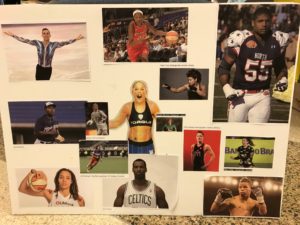 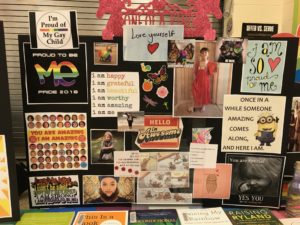 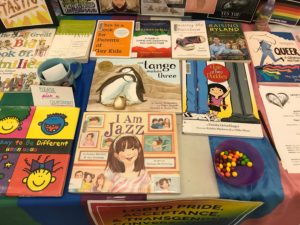 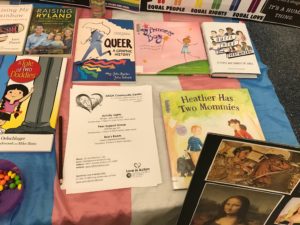 I even brought my guitar and sang a few songs on the stage.  I introduced myself as a transgender woman and watched proudly as the children sat on the steps of the stage and watched and listened and smiled.  One little girl sat listening, smiling, and waving her “Love is Love,” rainbow flag as I sang. Parents formed a semi-circle behind them and also happily watched and listened.

And we planted many seeds.

Dear Readers, despite the current regime, the future is bright and in good hands.  Changes are happening—positive changes.  Our presence at this diversity fair even prompted the principal of the school, after informing the faculty we would be there, to introduce a new, school-wide policy: No more addressing the student body during assemblies, as “boys and girls,” no more greeting your classes with, “Good morning, boys and girls,” no more dividing groups by boy-girl.  This type of change is huge for queer kids—those in and out or questioning.  It shows one positive act for the LGBTQ+ community has far-reaching effects.

Join us.  Encourage your schools to invite the queer community to attend your diversity festivals.  Advocate for non-gendered bathrooms and non-gendered language in your schools.  Encourage teachers to learn about queer issues, talk with your children and neighbors and friends.  And if your child has a question for one of us, say, if we meet in the check-out line—let them ask.  Don’t censor them because you worry we’ll be offended.  Let them ask.  Their questions are important, our answers are important, that you support your children asking questions is important.  Plant seeds with us and watch as a garden of rainbows sprouts in the hearts and minds of people everywhere, watch as the culture continues to grow in simply seeing us as people who deserve equal rights like anyone else.  Watch as your children continue to blossom as lights in the world. 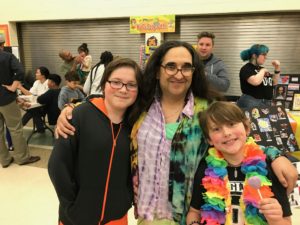