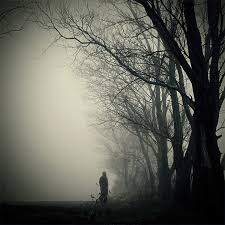 Silence couldn’t help himself he rushed into the room pretending to dust things.  Tabby hissed him out.

“His Mother’s the Moon,” said the Lady. “Oops…I should have let you answer that.  Sorry.”

“But what about your…your… earth mother?” asked the Lamp.

“She’s not my real mother.  She’s my guardian angel that Mother gave to me to help me on my journey. But then, when I died…”  He trailed off and Silence stepped in and put his arm around him.

“Not yet,” said Tabby, “let him finish.”  Silence grunted and stepped away.

“I was nine years old when I caught a fever and died.  I didn’t mean too.  Both mothers were sad.  You see, when I died, the chord that connected me with this world was cut, and when that chord was cut, I got separated from my guardian angel mother…I couldn’t find her, and I didn’t know how to get back to Mother Moon…so… so…I’ve been wandering the streets ever since.”

Ghost Boy couldn’t go on.  Silence stood next to him like a sentinel.  He cast a grave look of intensity and eternity around the room.  No one dared try and break him this time, not even Tabby.

Tears were falling down Ghost Boy’s face.  Tabby locked eyes with Silence.  Silence wouldn’t budge.  “It’s alright,” Tabby thought to Silence, “The Lady has him.”  Silence looked down at Ghost Boy and then reluctantly left the room.

“That’s about all we do,” said Ghost Boy.

“So are you ready?” said the Lady.

The Ghost Boy looked at her in the eyes for the first time.  His own eyes filled with tears.  “Yes,” he said.

“Good,” she said and the Ghost Boy could see she had tears in her eyes as well.

She got up and said the Piano, “Explain what’s going to happen, I need to get something.”  And she left the room.

“You were right when you said a chord was cut the day you died,” began the Piano, “but there’s another chord that can never be cut.”

“The one connecting you and Mother Moon.”

“Listen.  Not all chords can be cut, but some can be lost or forgotten, or worse–ignored.  Deep inside you know this.  A chord of true music, like the love between a parent and child, echoes and travels forever and ever and ever–”

“I don’t remember forgetting any chord,” said the Ghost Boy.

“Nobody does until they hear it again.  All the sudden they remember.  It sounds familiar and then they either pursue the chord or let it go by.  You recognized something familiar in the music the Lady channeled and you chose to pursue it or else you wouldn’t have come.”

“Music is like Light and Love” said the Piano, “it’s for sharing.  When you died you assumed you had nothing left to share, so you became a ghost.  But you do have something to share.”

“You listen child, that is your gift.  You are a good listener.  Most dead people, like most living people, rarely actually listen.  The dead are always crying out to live again.  Living people do this to, by the way–always clambering for someday.  But you listen, and when you listen, you are sharing yourself.  You are giving the Lady and me a great gift.”

“Exactly,” said the Piano, “you listened when you first heard Our Lady’s music and wondered where it was coming from and where it would lead you.  And here you are.  When she comes back to play, just listen and gradually begin to wonder where the music will lead.  Imagine your Mother Moon and just listen.  The music will do the work.  You listen.”

Ghost Boy was crying again.  He wanted to hug the Piano, but how do you hug a piano?  He tried.  He bent over and grasped as much of that old upright as he could.  He kissed it and more tears fell, trickling between the keys and right down into the Piano’s heart. 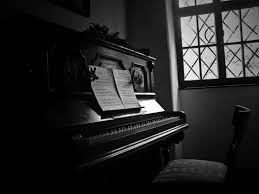