In Part Two, the Ghost Boy is faced with the decision of going back to the Moon or staying on earth.  What does he decide?  Part Three has the answer. 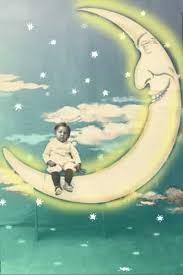 The next day, everyone shushed each other as they heard the Lady’s keys jingling, and the tumbler tumbling, and the door knob turning.  A chilly breeze swirled gold and red leaves into the room much to everyone’s delight as the Lady came in.

She plopped her keys on the sofa next to Tabby.  “You’ll be looking for those in the morning,” he said sniffing them.

She kicked off her shoes and filed through the mail as she walked into the kitchen.

“She’s so thoughtful,” sighed Floor, “bare feet are so much more pleasant than heels.”

“I hope she doesn’t wait too long to play,” said Ceiling.

“I hope she turns my light on soon.  I’m getting chilly,” said Lamp.

“I wonder if the Ghost Boy will return,” said Aloe.

The Walls braced themselves.  It was such an interesting sensation when Ghost Boy passed through.

“Where’s the Lady?” asked Ghost Boy appearing in their midst.

“In the kitchen,” said Ceiling.

“I’m a ceiling,” said Ceiling, “I see everything.”

Satisfied, the Ghost Boy turned and placed two little round pieces of silver on the Piano.

“I’ve been saving them for years.  I never wanted to eat them because they were the last things I had that Mother Moon gave me.”

“Light on your feet,” smiled the Floor.

“And you tickle when you pass through,” said the Walls.

“You look like you have a question child,” said Tabby, “what is it?”

“It’s just…I mean…how does it work?  How will her music take me home?”

That’s when the Piano finally spoke.  Everyone turned.  Other than the Lady, none of them had ever heard him speak before.

“First of all boy,” he said, “Our Lady is a channel.  The music comes through her, not from her.  It doesn’t even come from me.  We’re both channels.”  He paused, everyone was riveted, even Silence who had slipped into the room with only Tabby noticing.

“Why is everybody staring?” Piano asked, “I spoke, so what?  I’m not like you people who speak whenever they feel like it.  I listen.  Listeners make good channels.”

“Is that why Silence never touches you?” asked Aloe.

“Yes,” said Piano, “I may listen all the time, but my heart strings are always vibrating.  Every step the Lady takes—anywhere in the house, makes them shimmer.  When thunder rolls outside my heart feels it.  All sounds and movement, every emotion and thought, is heard and collected in my heart.  Eventually the Lady sits down and together we become one channel.  And all the things she’s collected and all the things I’ve collected, and all the things the world wants us to channel, come pouring out.”

“Will I die?” asked the Ghost Boy, “I mean die-die—for good this time?”

“Die?” exclaimed the Piano, “For heaven’s sake, and I mean that quite literally, no, of course not.  You’ll live.  The music will cover you and clean you and turn you and fill you and carry you and you will live and you will rest and you will wake and you will find yourself in your mother’s arms and you will be home.”

Just then, the Lady walked into the room and over to the Piano, dropping the letters on the table as she went.  She noticed at the two pieces of moon candy and, after a moment, she looked over at the Ghost Boy, and popped them into her mouth.  Ghost Boy smiled.  So did the Lady as the sweetness of the moon light shimmered through her.

Then she began to play.  And somewhere off the coast of Maine, a whale leapt from the sea, arching its slow, graceful turn as it splashed back into the waves.  A black bear in the Adirondacks shook off a blanket of yellow leaves and ambled to the creek where the trout leapt like living rainbows.  Marigolds turned their lovely full faces towards the house.  Music beamed around the room.  The sweetness of the candy swirled in her mouth.  She laughed.

Ghost Boy closed his eyes and his mouth opened slightly.  His whole, silvery, transparent body glowed.  Waves of music coursed through the Lady.  She rolled the candy around her mouth and suddenly she was channeling storms.  Notes flurried through her as she swayed like a tree in a tempest.  Music blizzarded around the room, whirling in the corners like little tornadoes.  And then, slowly, her fingers crept to a gentle stream, until, at last, she lifted her hands and folded them into her lap.  She bowed her head.  She sighed a deep sigh.  Music shined in the Living Room.  Everything was thrumming.  Spider’s web billowed from the strength of the music.  She dropped down and perched on Lamp’s shade.

The Lady looked over at the Ghost Boy, and smiles. “Well?” she asked, “What did you decide?”

“I want to go home,” he said quietly.

Ghost Boy looked up towards the moon shining in the window.  “There,” he said.

Everyone looked up at the moon.

“That would explain the moon candy,” said Spider.

“How’d you get here?” asked Floor.

“I died.  Before this house was here, before there was even a Mount Airy, I died.”