We’ve reached the conclusion of our story.  I hope you enjoyed it.  There is always a way to go home.

“Alight now” said Piano, dragging out the “all” with his sustain pedal, “get ready, she’s coming.  I feel her footsteps.  Remember.  Just sit down next to her and listen.”

“What if it doesn’t work?” asked Ghost Boy.

“A disturbing trend,” laughed Piano, “people finishing each other’s sentences.  But I suppose it’s only fitting for the kind of work we do here.”

And then the Lady entered the room.  Ghost Boy stood stock-still, looking at Floor.  He slowly raised his head only to see her dark, wide eyes staring at him lovingly.  He tried to place where he had seen her before.  Her eyes looked so familiar.

The Lady walked over to the Piano and sat down.  She patted the bench.  Ghost Boy gasped out a laugh and sat down next to her.  She touched his hand (how can this be?) and then ruffled his hair, laughing softly.  “You touched me,” he said.  “And you me,” she replied.

“I know you from somewhere.”

“I am your sister,” she said, and then she placed two pieces of silver candy into his hand.  “Give these to Mother Moon,” she said, tears streaming down her cheeks. 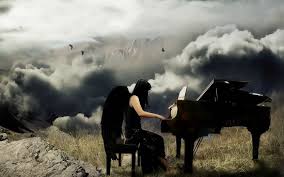 She directed every ounce of her energy to the Piano.  Spirits spiraled instantaneously towards her and from her, dazzling as a snow storm.  Music flooded the room.  The air became Music itself.  Time and space became Music.  And somewhere in the Atlantic, a manta ray leapt from the churning water like a black curtain.  Antelopes sprang straight up with delight, and then ran across the field.  Treasure boxes all over the world suddenly opened and memories, and passageways, secrets, and lost, sunken ships, all were found.  Prisons of fears fell open and were gone.

Ghost Boy listened.  He no longer thought about chords and fevers.  His thoughts were chords, and he felt mysterious stirrings within him.  He stared at the Lady, the sister he never knew.  She had their Mother’s eyes.  He loved her with a love so strong he felt he would burst.  He loved her for being his sister.  He loved her for doing what she did.  She had decided to stay and help others, like him, go home.  He felt a little ashamed that he was choosing to go home, as if maybe he should stay and help her help others.  And as he thought these things she shook her head slowly side to side.  “We all have our work,” she said, “this is mine.  Yours is to help others remember.  You helped me remember.”

Then the Piano began trembling, and the room resounded like a bell of clear brass the size of a house.  Suddenly Ceiling lifted and spun gracefully aside.  Walls parted.  Lamp dimmed in deference to the Moonlight spilling into the opening space.  Spider quickly found a place in a rhododendron bush and watched from the shadows.  Floor sank ever so gently.  Tabby hopped up onto the Lady’s lap.  She laughed and cried at the same time.  And the Ghost Boy rose on the river of music, elevating passed the room, turning like a toy on a music box.  He stood and stretched his arms into the night.  The night was life, infused with music.  It was holy and it was moving, and it was joyful.  As Ghost Boy watched the tree tops, and the rooftops, and the city and the world spin below him and away, he laughed out loud.  His fingers brushed though the fields of stars.  His sister wept and laughed, showering Piano with tears.  She was a fountain, a truth, a promise, a vow.  Even Piano cried.  His tears wove a silver liquidity into the music.  Mother Moon looked down and saw her boy rising on the stream of music, and she wept and laughed.  Melodies burst like fireworks into the night as he ascended higher and higher.  Lightening and snow, thunder and sparks, whirled around him.  Everything danced and rejoiced as the Lady played and played.  And as she played, assured and limitless, the Ghost Boy rose, deeper and deeper, into the Light.