They had walked all day. Miles they had come taking turns carrying the child. As the mother and father moved cautiously through the darkening woods they ached with fatigue. And when their plodding steps slowed to a halt, they sat down to rest, right there in the middle of the road. The mother handed the child to the father so she could stretch out. The father held the child on his chest and joined her on the cool, dusty road.

Then silently, from the darkness, yellow eyes appeared. The father grabbed the child and sat bolt upright. The animals stepped from the shadows towards them. He roused his wife. They huddled there together, shaking—turning every which way, only to see animals forming a circle around them. The child began to giggle. The father moved to cover his face, but the child brushed his hands away. His eyes widened with glee as the animals moved closer.

The first to reach them was the mountain lion. She carried something in her mouth. It was a rabbit. She laid it at their feet and turned away, yellow eyes flashing. The bear lumbered towards them next. In his mouth were two rainbow trout. He laid them before the trembling couple, snorted and sniffled, and then turned back to the shadows. Then came the heron, looking for all intensive purposes like a tall, skinny butler. He stepped his long, remarkable strides, and in his outstretched wings was held a bowl of pure, cold water. He offered it without spilling a drop. And so, one by one the animals came bearing gifts of wild berries, salads of dandelion greens and edible flowers, and even freshly baked bread from—from—the couple never found out where from. And lastly came the reindeer and the wolf. The reindeer carried a wreath of glowing candles in her antlers. With the utmost care she laid it before them. It illuminated their tear-stained faces. The wolf took his place beside the family and stood guard as they began to eat.

And so that night they feasted on a meal lovingly prepared by the animals. They had never had such a nourishing meal.

After they had eaten and drank their fill, the wolf disappeared into the cave of the night. And the couple laid back in the road to sleep. The darkness was almost complete as they stared exhausted into the tree-branch laced sky. Suddenly the trees leaned forward and down with their branches. The couple screamed, but then realized the trees were opening their arms in offering—they were giving them a place to nestle for the night.

The couple looked at each other and then carefully stood and stepped into the waiting branches. The trees lifted them instantly high off the ground. The air caressed the little trinity of humanity as it rose, higher into the night sky. That night, they slept like baby birds in the gently swaying trees.

It was the child who awoke when he heard the earth singing the sweetest of lullabies. It was a song of crickets and of night birds and frogs, it was the song of the padded steps of animals, it was the song of the river flowing somewhere in the darkness. As he listened, he felt the earth holding the roots of their tree with all of the love and tenacity of a mother swaddling her baby.

And so it was the child who felt the arms of the moon reaching down and lifting them even higher.

Her embrace was like refreshing silver water pouring slowly over them. And as the moon cradled the little family, the child laughed as he watched the Milky Way swooping her star-fringed arms and gathering them all—the mother and father, the babe, the animals, the trees, the earth, and the moon into her gently dancing arms.

And the baby reached up and brushed her face, tracing his fingers through her star-dappled hair. And as he did, his eyes caught site of the universe turning towards them, carrying them along in the perfect folds of his cloak of shadows and light.

And the child laughed. He laughed as he saw the Creator of All holding them tenderly in cupped hands. And as he took in this marvelous vision, he sank into the cradle of his parents arms and knew all of this was within himself. He held it all—the animals, the trees, the earth, the moon, the Milky Way, the universe, and the Creator–in his heart. Within him was one elaborate tapestry of wonder and perfection. He knew he treasured it all inside, and with that thought, he went to sleep in the dear, innocent arms of his mother and father. 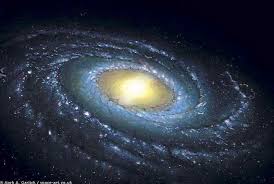