The undesirable voice entered the attic.  I stood on a box and shouted, “Get out of here!” The voice only shuddered and grew into two.  I bolstered myself and shouted again, doing my best to resist them: “Get out of here!”  I shouted.  And those two voices, those undesirable, negative voices—grew—they grew into three.  The more I shouted the more they multiplied, and soon the attic was filled with a chorus of undesirable voices all talking at once saying horribly negative, defeated, angry, and fearful things.  And the more I yelled at them to leave, the more they grew.  It was then, discouraged, beaten, and without hope, that I saw a dusty book sitting on shelf.  I picked it up, blew off the dust, sneezed, and then opened it up at random.  When I read the words I was amazed.  Rivers of light and hope coursed through me.  I looked back at the book.  Another line flashed like lightening into me.  I laughed, closed the book, turned to the undesirable voices and said, “What is it you want?”  They were stunned.  No one had ever asked them that before.  They stopped talking.  One of them finally spoke and said, “To help you.  We want you comfortable, in that old place.”  Another said, “To simply be acknowledged, after all, I am only trying to keep you in the place I think is best for you.”  And one by one they spoke, and one by one I listened, and then, one by one, I blessed them, thanked them, and released them.  And as I blessed them, new voices–positive, loving, encouraging, self-affirming voices entered the space.  And the attic glowed, it thrummed with beauty.  After a while, the entire attic was filled with joy.  And whenever one of the undesirable voices entered, I asked it what it wanted, thanked it for trying to help (in its own misguided way), blessed it, and then let it go, replacing it with a new voice—one of love.  I did this by listening and by talking with others about what the voices were saying.  What did I read in the book?  “Resist not evil” and “Love your enemies.”  What I resist persists.  What I hate grows. What I love is transformed into Light. 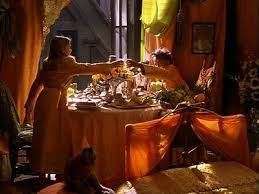