The Enchanted Adventures of Thought and
Feeling

Part I: Getting Acquainted

Once within
a time, Thought and Feeling walked side by side on a late evening stroll.

“Look at
those two starlings swooping and dipping over the field,” said Thought.

“They’re in
the Sturnidae family.”

“Look at
that sunset,” said Feeling, “Those crimsons splashed with purple–so lovely.”

“Are you
weeping?” asked Thought.

“Sometimes such
beauty moves me to tears.”

“Interesting,”
said Thought, “I didn’t know the effects of pollution and dust particles in the
air could illicit such reactions.”

“They do for
me,” said Feeling, sniffling a little laugh.

As they strolled together the shadows
lengthened and the first stars blinked in the navy blue sky, giving birth to the
constellations.  Thought described their shapes
and mythologies and Feeling recited poetry.
Thought pointed out the North Star and started giving its history and as
he did Feeling looked over at him looking up at the sky and said, “You so much,”
she said, “I’m impressed.”  Thought
brought his gaze to rest on Feeling and looked her in the eye.  “I think it’s brilliant,” he said, “how you
get to the heart of the matter.”

They both
laughed and continued walking, but this time hand in hand.

Night
descended, draping her black shawl over the trees.  From within its folds, fireflies emerged and
rose and fell, dancing over the fields.
Bats fluttered like tattered pieces of shadow loosened from the gossamer
fabric left to hang in the tree tops.
Deer stepped from the forest and stood looking this way and that over
the swaying grass.

“It’s all so beautiful,” Thought said,
stopping to take it all in.  “It feels so…so
holy.”

“I think
it’s beautiful too,” said Feeling, pressing in closer to Thought, “and
definitely holy.”

Thought
looked at her and furrowed his brow slightly.
“Wait,” he said, “you just said you think
the night is beautiful, and I just said it feels
holy.”

“And?” laughed
Feeling already knowing where he was going in his train of thinking.

“And?” said
Thought, “I think we’re influencing each other, don’t you?”

“Well, I
suppose,” said Thought, “but what happens if we begin influencing each other
too much?”

“What do you
mean, by too much?  Do you mean you’re afraid you might lose
yourself in me?”

After some
silence, Thought nodded and then said, “But that may not be a bad idea.”  And with that he drew her close and kissed
her.  She readily received his attentions
and readily gave him her affections and soon they were rolling in the firefly
dappled field beneath the blushing stars and smiling moon.

They awoke
to a shower of bird song.  They sat up in
the field and shook the grass from their hair.
They looked at each other and embraced, drenched in iridescent dew.

“I think
so,” Thought replied.

“How do you
feel?” Feeling asked.

“Wonderful,”
he said, “What do you think about our mingling?”

“From now on
we are one, woven together in song.”

“Melody and
harmony,” she said, “and our children,” she began…

“And our
children,” he continued, “will be called Freedom and Unity.”

“And they
will grow to become Living Trees that will sustain the world for many
generations,” said Feeling.

“I think so
too,” said Feeling.

And with
that they rose together and walked home in the newly born light of a newly born
day. 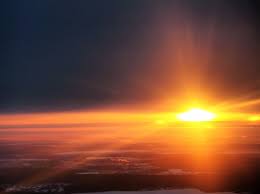