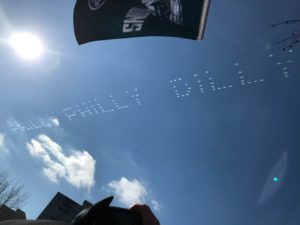 I picked up sons Ben and Daniel at 4:30 AM.  After stopping at Wawa (because everyone should stop at Wawa on the way to anything–especially on their way to a Super Bowl Parade) and headed downtown.  It took us an hour to both drive and eventually find a parking space.  It was another 15-minute walk to where we set up camp for the next eight hours, near where the parade was going to end—the Art Museum steps.

As the crowd grew hour by hour, the people grew kinder and happier.  People were dancing, singing, oh, yes, and drinking—and they were also happy, high-fiving, laughing.  And as the sun rose and illuminated the Art Museum, the sea of people swelled with anticipation.

People played catch with footballs that seemed to be soaring around the crowd from out of nowhere. People introduced themselves to those standing around them.  People exchanged stories of how long they waited for this day and what it all means.  Strangers hugged and offered each other blankets, handwarmers, and beer.

And the green.  Nearly every person there—of all shapes, sizes, ages, race, gender-identity, and expression was bedecked in Eagles green.  Looking out across the ever-burgeoning crowd, it turned into a luminous green sea that ebbed and flowed and raised its waves to heaven.

Yes, there were the knuckleheads.  One idiot climbed a tree, urinated (very poorly aimed) into a water bottle, spraying the people below with urine, and then, threw the full bottle down among the people.  If the police hadn’t been there I think he would have been beaten to a pulp.  The people below were justifiably (pardon the pun) pissed.

One nearly-naked guy with green hair smashed two beer cans together in front of his face and roared as he sprayed the crowd with Budweiser.  The surrounding people weren’t happy, but not as unhappy as those who were where the shit-brain peed on them.

Then there was the guy so stoned he came tumbling through the crowd like a wobbly train, and, if I hadn’t had been there to grab him, he would have plowed into the two old ladies in front of us.

“Thank you,” he said with his voice slurred and his eyes rolling around in his head like marbles, and then he just kept stumbling through the crowd.

There was no violence though.  No meanness (yes, peeing off a tree was mean, but he was clearly drunk, and cracking up as he did his heinous act), no rage, no property being damage, no cars set on fire.  It was plain and simply a party.  It was a celebration of civic-pride—city pride—family pride—and, of course, pride for our team—the bunch of under-estimated players who overcame a ton of adversity to sweep unexpectedly and remarkably through the playoffs to bring home the long-awaited Super Bowl victory.  It is a team comprised of good and decent people.  It is a team together in true brotherly love.  It is a team unlike any other I have ever seen, and I was proud to be there to celebrate them and our city.  It was glorious, hilarious, bizarre, and fun—profoundly fun.  When a city comes together to dance, sing, and embrace one another—it is a truly beautiful thing—I dare-say, holy.

There is so much wrong with the world.  And, I believe there is far more right with the world.  Today was one of the right things, and I am grateful to have been there with two of my sons.  We will never forget it, and neither shall this team, this city—all the people living and dead who waited so long for this moment—who suffered through agonizing years of frustration.  This was a day of unbridled joy—a collective exhale of relief and a collective in-breath of getting ready to sing—arm-in-arm-again and again, as loudly as humanly possible— “Fly, Eagles, Fly…” 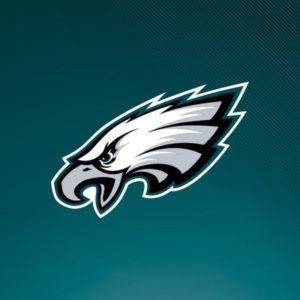