For some the future is a movie where they’re falling
In the monster’s mouth only so far and then suddenly finding
Some unforeseen and extraordinarily unlikely method of escape.
For some the future is a road rising to meet them, unfurling
From some distant destination called hope and healing.
For some the future is a series of doors that appear out of nowhere
In a field or on a city street and open
At the slightest touch or sigh of relief.
For some the future is a dark forest path winding through patient trees
Carrying lanterns lit with columns of light.
For some the future opens like an unexpected clearing
Of wild flowers and honeybees that bob up and down in a pine scented sun.
For some the future is an ocean tide curling around their feet
Enticing, inviting, filled with bits of information unclear, yet sun dappled and soft.
Listen, I am trying to find ways to keep going. Trying to imagine
Scenarios where the darkness isn’t all there is;
Where a sense of adventure and humility at not knowing
Somehow sustain me on my way;
Where I don’t need to crawl to make it, where I don’t need to trudge
Or drown or wish I was dead. I am trying to imagine life
Unencumbered by the depression that has kept me locked
In a box cramped with ghosts and bones.
I am trying to let the future be gratitude and serenity
For whatever comes my way. I am trying to imagine
Breathing freely into the unknown as I would stepping out
Into a bright, spring morning. I am trying to do the one thing
That if I do on the first day of the year, they say I will do all year long:
I am trying to dance with ghosts; I am trying to build a framework
And a bridge out of bones. I am trying to see into the darkness
Just far enough to believe there is a reason to believe.
So there, I’ve done it. I’ve written another poem.
I’ve tried honestly to tell you where I am, what it’s like.
And you’ve read it. Now we both get to go together
Into towns just waking at dawn where invisible trains
Sound somewhere beyond distant, cloud-misted hills,
Where diners that smell like coffee and toast
turn on ‘Come in We’re Open’ signs just as we arrive.
We both get to go towards a time that isn’t yet
And somehow not fall into despair.
Please, I am going to do one more thing
That I need to do for the rest of the year:
Hold your hand without shame because the fear
Can be so deafening, and the way ahead was never meant
To be realized alone. 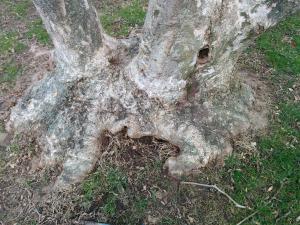