Rarely do I post reruns, but I thought this Halloween season (if it isn’t scary enough with the election) could use an inspirational ghost story.  It’s in five parts, and isn’t your traditional ghost story.  It’s about a boy, a ghost boy, who is trying to find his way home, and a Lady who channels music that just might help him get there, oh and a cat, a lamp, a houseplant, a wall, floor, ceiling, and a guest appearance by Silence. Enjoy. 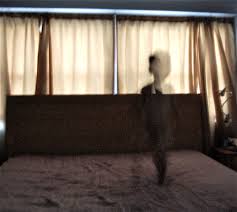 Channels
by Joseph Anthony
Part One

Sitting at the old upright in the living room, she played late into the night.  Her fingers rivered over the keys, pouring music everywhere–into the living room, the attic, the street outside, and into the Ghost Boy wandering aimlessly along Germantown Avenue.  He stopped and stared towards her house.

“It’s working,” said the Tabby Cat watching him from the window, swishing his tail to the music.

The Lady smiled and continued playing.

Cars drove through the Ghost Boy as he stood, enchanted by the sound.  The music strummed silver strings inside him that he didn’t knew he had and he began drifting towards the sound.  It was as if he had stepped into a stream and lost his footing, and was carried to her house.

“Pretend we don’t notice him,” said the Lamp.

Just then, he wafted in through the drapery, like a wind-blown piece of the moon, and sat down across from the Lady.  She smiled and kept playing.  He closed his eyes. Notes flew around the room like so many audible butterflies, tumbling dizzyingly over one another in ecstatic flight.  The music swelled and somewhere in the Wissahickon Woods, a great blue heron unfolded her wings and lifted into the air.  Deer stopped nibbling the grass and looked up with luminous eyes.  People walking to McKinney’s Tavern up the street from her house suddenly felt happier than they had in years.

As he listened, the Ghost Boy looked out the window as the first stars bloomed in the indigo field of the sky.  The Moon appeared; her face titled, and watched him from all that way.

As the Lady played, sometimes her fingers barely touched the keys and the Piano’s hammers struck the strings like dew drops dripping onto a spider web.  Other times she fairly pounded the keys, and then the hammers shot off sharp, brilliant notes, like sparks from the hooves of mountain goats somewhere on a rocky ledge a mile above the ground in Southern Utah.

The Ghost Boy turned his face towards the Lady.  Her long, dark hair swayed with her body as she dipped towards the keys and then leaned back and away, as if dancing while sitting–trancelike and possessed.  Her eyes were closed as her fingers alighted over the keys, like sylphs over a garden of white flowers.  She was smiling, pleased as any clear instrument would be, as the sublime music coursed through her.  And somehow she seemed familiar–her pale complexion, her flowing movements.

He began thinking of home and about how he died so very long ago.  He suddenly remembered the fever and the burning up inside.  He shuddered as he remembered how it felt when the chord that connected him with this world snapped and how he feathered upwards above his clammy, sweat soaked body, frightened and lost, as if he were drowning in space.

Then she stopped.  He startled.  She lifted her fingers.  Her eyes opened.  She turned her face and looked in his direction.  He could swear she saw him.  He felt embarrassed and confused.  He looked away.  She waited a moment and then Silence entered and stood in the middle of the room, motionless as a hawk; frozen, yet able to shatter into flight any second.  The Lady sighed and then walked into the kitchen.  The Ghost Boy could hear plates clinking and silverware being taken out.

Suddenly, everything in the room started talking at once and Silence imploded into an unseen void.

The Aloe Plant on a table by the window spoke first:

“My arms are trembling,” said the Aloe Plant.

“My web is singing,” added Spider in the corner of the ceiling.

“She’s brilliant,” put in a Lamp sitting on a table by the sofa.

“Smooth as linoleum,” said the Floor.

“It’s great being all ears,” laughed the Walls.

“She’s perfect,” said the Tabby Cat as he lifted his head to lick his paws, “what do you think?”  He looked over at Ghost Boy.

“I…I don’t know,” he stammered, “I was walking outside when I heard the Lady’s music.  I guess you could say it drew me here.”

The Lady walked back into the room, and over to the window.  She closed it and drew the drapes.  Ghost Boy could swear he saw the Moon wink at him just before the drapes were closed.  Then the Lady sat down next to Tabby and stroked the back of his head.  He purred, gloating to the others.  “Nevvverrr haaappensss to youuuu,” he purred.  The Lady looked around the room and her eyes settled on the Ghost Boy.  He shivered.

“Does she see me?” he wondered.

“Yes,” she said, “and you’re welcome to stay.  Only tomorrow you need to make your decision.”

He was stunned.  He didn’t know what to do or say.  He sat in the dark for a long time and then drifted through the wall and out into the cold, autumn scented street. 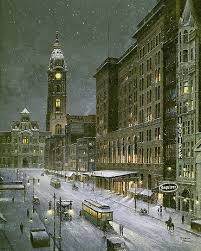