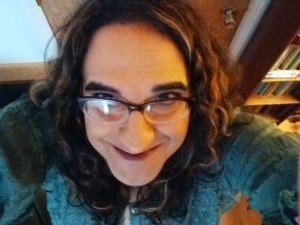 People ask me a lot: How do you know you’re transgender? How do you know you’re a woman? Sometimes I reply: Well, how do you know your gender identity or your gender preferences? It’s like knowing the color orange is orange—you just know. Other times I wax poetic and answer: How does the bee know it’s a bee, and how does it know to do its honey-making dances? How does spring know its spring and how does it know when to wake up all the flowers and the aforementioned bees? There is, however, no real way to describe the indescribable. Something happened to me recently though that speaks volumes to my own, personal affirmation of my revelation of being a transgender woman—an affirmation that struck me with such intensity that it rocked my world with joy. It’s personal, as I said, but you might relate to some of what I am about to share. My guess is it could apply to many life circumstances, not just being transgender. On a cold winter’s night, as I walked down Chestnut Street in Center City, Philadelphia, I realized the movie had stopped.

Ever since I can remember I lived my life as if I were in a movie. Better put—I was the movie. It wasn’t just the sensation of being watched, although that was there, it was also a deep, penetrating awareness that everything I did was fake—fake and acted. I was an actor (I am not going to say “actress” here because growing up I did not know I was female) par excellence. Everything I did, every word I spoke was fiction. And no, I wasn’t a liar in the sense of not speaking the truth. I was being filmed in one long, rambling drama. My life was a movie about an actor—and an actor playing an actor within a movie that was really an unlived life filmed as a movie—sort of like when you hold a mirror up to a mirror and the reflection goes on forever. There was no truth to the story. Everything I did or said was pretend and all of that pretending was being watched by a part of myself that knew somewhere, somehow that what it was seeing, was acting.*

I do not suffer from Truman Syndrome, nor am I a victim of derealization, or any other type of schizoid disorder. I am not paranoid. Yes, I suffer from hyper vigilance and PTSD. I didn’t need to learn how to dissociate when I was being beaten or molested. It would just happen. Repeated abuse does that to a soul, to a brain. This sensing I was in a movie was altogether different, and began several years before the sexual abuse. This sensing I was in a movie happened twenty-four-seven. At school, at church, at the toy store, in my room, at dinner, and all throughout my life, from the time I was four, five maybe–I had the unmistakable recognition that I was being filmed. My life was a movie. My life was a lie.

Who was filming? Who was behind the camera or in the director’s chair? Everyone. Everyone and no one. And myself. Who was watching, who was the audience? Everyone, no one, and myself. This is hard to put into words, but it was like my own life watched my own life and didn’t know what to do about it or how to stop it, or why it was happening, or what the ending was going to be like, or when. I wasn’t looking for attention, nor was I narcissistic, I wasn’t even delusional. I simply lived in a movie filmed through my own eyes, my own brain, and I hadn’t a clue as to why. It wasn’t like thinking god was watching or Santa Claus. It was more like just walking, following the steps of myself, yet knowing they weren’t mine, knowing they meant nothing. I remember looking down at my feet as I walked and wondering where they were going. I remember looking down as I puffed out my chest because I was obsessed with trying to look tough and “manly.” I didn’t care if god or Santa watched me. I didn’t even care that I was a constant actor. I didn’t know anything else. All I knew was that my everyday life was a fiction, a pseudo- documentary with a subject that didn’t even exist and that no one cared about.

My eyes were the camera lenses; my own head both the camera and the screen. The world was the screen too and the camera. Everywhere I walked or stood or ran I was acting, pretending–even while sleeping. It’s no wonder I never had a restful night’s sleep. I was pretending to be asleep as the world snuck into my room and silently gathered around my bed to watch me dreaming of real life.

I laughed when I was supposed to. I cried when I was supposed to. I learned how to fish and ride a bike and get angry on cue. I moved from one scene to another never quite feeling like I was in the right one or saying the right lines, but I was there—I showed up. Yet somehow the background and the staging were all wrong; somehow the other people in the movie could never get close enough to me to wonder how I could be there, and yet not be there, all in the same scene. I was being filmed and I was also, somehow, inexplicably covered in a thin film made of dust and shadows.

Throughout my movie life, I did what so many other people do with a history of abuse–I turned to addictions—pornography and food mainly. Ever chasing some sort of moment or flash of reality, yet never finding it for more than a fleeting second, and those fleeting seconds were always steeped in shame, ugliness, and remorse.

I suppose some people who relate to this experience of sensing being filmed and watched might imagine it must automatically mean they’re transgender. That was only the case in my life. Why you might resort to unconscious hiding in your own life might happen for a myriad of reasons. The only difference perhaps is that I know now that I was hiding, and I know now that I am not.

While on some twisted level this survival mechanism was the work of a child-genius attempting to create a world of safety, this being filmed over decades eventually became a burden. I began to sense something wasn’t right, something was being hidden in the process of being filmed. I hadn’t a clue as to what it could be. I kept associating it with my abuse or my shame. However the truth was far more surprising than I could have ever imagined. And the strategy of stepping out of one’s own life by pretending to live it and have it filmed all at the same time eventually lost its efficacy—if there ever was any to lose.

At one point I thought I was being filmed by aliens. Perhaps they had kidnapped me years before and implanted a camera in my eyes to study a human life. Perhaps alien superpowers would eventually show up when I needed them most. Perhaps I had died as a child by getting hit by lightning and this movie of a life was really some sort of ghostly projection I was trapped in until another incarnation came around.

Thing is, I got used to it. It just was that way. It never stopped. I lived my life pretending I wasn’t pretending, acting that I wasn’t acting. I was an unreality-show being made into a reality show long before those programs existed. The experience of being filmed and watched was so inwardly part and parcel of who I was, that I never tried to stop it. I figured it was like that for everyone—everyone lived a fake life, everyone was pretending. “All the world’s a stage,” after all. Or worse, we’re all acting on karmic impulses from previous lives and none of us are free. I justified my perceptions of being filmed by blaming it on religion, the government, aliens, ghosts, spirits, elemental beings, devils, angels, and sometimes on the belief that I was an addict.

The long and short of it was that I didn’t really exist. I was an imposter pretending to be someone else who was an imposter. And that sensation carried itself through right up to the moment I realized I was transgender, only I was so enraptured by living the truth it took me a few months to notice it was gone.

So one night, walking down a poorly ploughed Chestnut Street near 12th street, I suddenly stopped—more like I was halted by some angelic, winged hand trying to get me to notice the fact that I was finally free. I was no longer being filmed. I was no longer pretending. My life was real. The film had dropped like a snake skin. I wasn’t an imposter in my own story. I was real. The filming had stopped. I was walking down the street a transgender woman and I was alive, liberated, present, unafraid of breathing. I was a pure, living soul–pure in the sense of being born, pure in the sense of the dawn, pure in the sense of the moon rising over a silver pond. The movie house was gone. The camera in my head was gone. The ever-present sensation of existing in a false life vanished.

I see the movie clearly now—now that it’s over. I see how impossible it was for the little girl to make herself known. I see how the little boy did his best to keep her safe. I see how the rest of the world knew something about me was askew yet didn’t know what to do about it, yet let alone admit I was askew. I see how the abuse only furthered the sensation of being watched and of being unreal. I see how, despite feeling like so much time was wasted, that this was the right moment for the little girl to rise, to grow, to blossom into a woman. The work I had done untangling the abuse and the addictions created a nest of safety for her to grow her wings and eventually to fly. The darkness I had gone through and survived had bloomed entire heavens of wonder. Finally, after all those years, my life shines in truth: I am a woman, a transgender woman of magnificence and power. And I am taking the script I was cast in, and all the costumes and props, and authoring and directing an entirely new story—a true story—an adventure story, a romance of the self, woven with magical realism, a mystery where there is no crime—where the only mystery is: how far will this woman go? It is a story of inspiration and hope, perseverance and courage, and the ability to rejoice in who I am—no matter how I transition or stay the same, no matter what I do or do not do, no matter how my body looks, no matter what anyone says or does. It is an ever unfolding story—it is my story–detailing what happens when a star is born.

*It behooves me to address those who have known me personally over the years: You were always real. I was the fake one. Your interactions with me mattered and were genuine. My presence however was not there. I tried, but it was like being in a coma with my eyes open. I could see you, think I was communicating, but actually nothing was coming out of my mouth. I couldn’t speak or even move. I love you all for trying to see the real me.