Stop the Killing, Stop the Hate,

Many die every day fighting wars both inner and outer, for freedom–yes, for freedom–in a country meant to protect the freedoms of all individuals–in a “Christian” nation supposedly founded on equal rights for all.   Transgender people like me fight to exist, to pee, to not have to justify and explain my right to simply live.  Every solider that died for American wars fought to keep people like me safe.

We are not a threat to “American Christian values.” I am not a threat. There has still, to this day–ever been one recorded incident of a true trans person harming anyone in any public bathroom EVER, and yet dozens and dozens of politicians and “religious” people have been charged with sex crimes and no one is murdering them (not that we should, of course).  We are not a threat to the radical feminists or to the radical, so-called, defenders of American values.

There is a wiki article that shows how the war on transgender people only gets worse and worse.  These are people fighting wars and battles simply to exist in their own country. Of course, many have been murdered and were never reported. Many, many suicides happen every day and are not listed here. These are murders too.  And the people inciting violence on them are responsible for their deaths—the pastors, politicians—the parents who kick their kids out of the house, the bullies who torment them—they are all responsible for killing the human beings just trying to fight the battle for their right to exist.

Notice how the numbers increase year by year. It is no coincidence that the more hate is spewed from so-called Christian leaders and politicians the more transpeople die–the more on the LBGTIQA spectrum die (yes, I know, and the media gives it all more attention and that accounts too for the increase in numbers).

Stop the hate. Stop the murder. Stop the suicides. Love your kids like real parents should. Love and accept your family members like real families should. Protect your loved ones.

While we remember the lives of those lost for our country–remember they died for people like me—that I may live with the same freedoms as you.

Transgender people like me and all other LGBTQIA people have never been a threat to “Christian” values.  If those values were so strong, so rooted in the “true religion of God,” then no one should fear their ever being harmed.  My rights do not invade yours.  Your ability to marry whomever you choose is in no way effected by who I choose to marry.  Prove how solid and true your values are and LIVE them.  Jesus NEVER hated people like me and he would weep to know how many parents kick their children out of their houses, or bully them to suicide.  Jesus would weep to know people like me are killed for simply being who we are—who “God” supposedly “made us to be.”  Jesus would be appalled to see his name, his teachings used to spread needless and shameful hatred, violence, bigotry.  If your truth was so strong it wouldn’t need defending from transpeople who just want to pee in a public restroom–who just want to LIVE in peace.

If you go to churches of any kind–temples, mosques, any type of religious body–advocate for us–for me.  Write to politicians and tell them to wage war on the issues that matter—poverty, crime, homelessness, student debt, pollution, and so on.

Let’s not make any more memories of those killed in the line of duty–abroad–or here–here with people like me just trying to live our lives in peace–here in our families, in our towns, in our schools, in our sacred places of freedom. 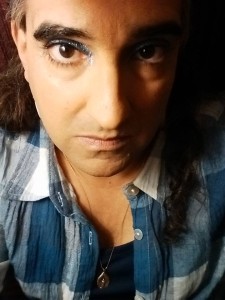 One thought on “Stop the Killing, Stop the Hate, A Memorial Day Message By Jennifer Angelina Petro”